A History of Barbeque in America

There’s nothing quite like a good old-fashioned barbecue to bring family and friends together over the holidays. But while we all love the taste of those delicious smoked meats, few people know the origins of this outdoor culinary tradition.

Barbecuing is an outdoor cooking method that uses live fire and smoke to cook meats, which we here in the U.S. often refer to as a pit barbecue. This indirect method of cooking meat imparts a distinctive smoky flavor, which we have all come to know and love.

We here at Red Hot & Blue know that you love BBQ as much as we do, so we have traced the story of barbecue in America right back to its very beginning to share it with you here. 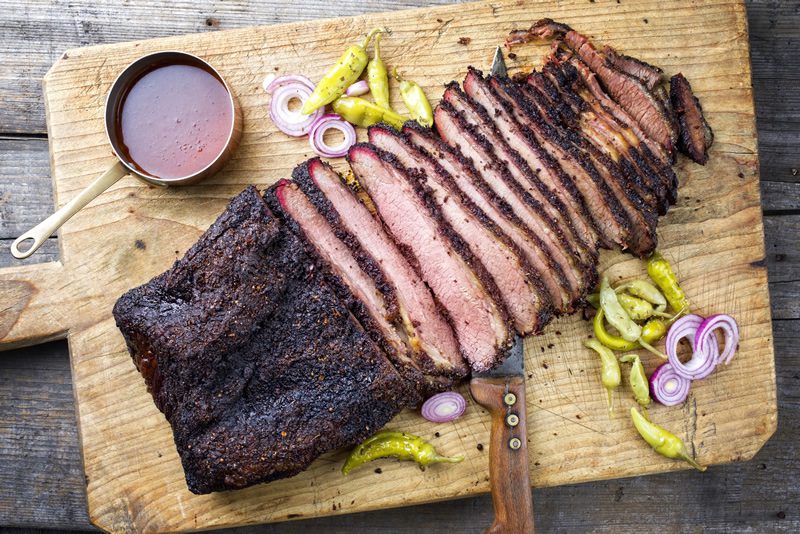 How Barbecue Started in America

Barbecues are an important part of American tradition. In the South especially, it has developed into a rich subculture. There are many different barbecue styles and competitive events at which people can showcase their outdoor cooking talents.

But just how American is this form of cuisine, and how did it get its start? This history of barbecue in America began way back with the indigenous people in North and South America cooking meat outdoors.

The word “barbecue” stems from the Spanish word “barbacoa”, which means to slow-cook meat over an open flame or in a pit. This term is thought to have originated from the word “barabicu” found in the language of the Timucua people of Florida, as well as the Arawak people of the Caribbean.

With the arrival of European explorers who settled in New England and the Southern states, the barbecue tradition of Massachusetts and Virginia came into being.

Due to the migration of people in the U.S. expansion, this cooking method was picked up and carried on to other territories. By the late 1600s, it had earned a mention in the historical record. Later, it evolved and migrated further south until it became synonymous with Southern cuisine.

The First Barbecue In America

Christopher Columbus brought pigs to America, and they soon thrived in the wilderness of the South.

Pig farming became an integral part of life for many in the South. Due to their short gestation periods and large litters, pork was always in abundance. Thus, pork came to play a large role in Southern culture and cuisine, making it the perfect choice for barbecue meat.

Southern cooks learned to slow-roast tough cuts of pork over fire pits to make them tender. By the late 1700s, George Washington was enjoying a barbecue in Virginia.

Initially, this cooking method was a convenient way of feeding many at large political rallies and church gatherings, which would often go on for hours. Over the years, however, barbecue spread throughout the nation. It evolved into many variations that we now enjoy with family and friends on special days.

The Evolution of The Barbecue Belt

From the Carolinas in the East to Texas in the West, from Kentucky in the North down through the entire South, four unique barbecue traditions arose. The Carolina, Texas, Memphis, and Kansas City barbecue styles were developed. Each came by their names according to their places of origin. With the exception of Texas who preferred using beef, pork was the meat of choice in these traditional styles. The seasoning spices and sauces, however, would vary from region to region.

This entire region became known as the “Barbecue Belt”.

Nowadays, we look for any excuse to enjoy an outdoor barbecue fest.

Especially popular on the 4th of July, BBQ has been a part of our culture since the very first Independence Day. Sporting events and other large gatherings also often involve this wonderful carnivorous celebration.

Depending on the region, the seasoned meat is cooked over the indirect heat of a wood fire/charcoal for up to as much as 18 hours. The unique flavor that ensues is a combination of smoke, meat fats and juices, and any spices / basting sauces that may have been added to the meat beforehand.

The barbecues of Alabama, Georgia, and Tennessee are usually pork served with a sweet tomato-based sauce, although several regional variations exist. An example is the “white sauce” of northern Alabama; a mayonnaise and vinegar-based sauce used on pork or chicken.

In Memphis and North Carolina, a delicacy called a “pulled pork sandwich” is prepared by shredding barbecued pork and serving it on a bun, topped with coleslaw.

Texans, due to the Lone Star State’s history of cattle raising, generally go for beef over a wood fire. Texans sure do love their beef, especially if it’s rubbed with salt, pepper, and select spices, then slowly cooked over wood for several hours. From hickory to oak, different types of wood also add to the mouthwatering smoky flavor.

No matter where you come from or how you like to eat your meat, one thing is certain. Barbecue is a culinary treasure that we can be proud of.

Final Thoughts on the History of Barbecue in America

Barbecues have been enjoyed in the U.S. in one form or another since the early days of European settlement, right through the colonial period and independence, up until the present day. No other form of cuisine in America is as steeped in history and tradition as the good old-fashioned BBQ.

Despite its humble origins, the barbecue tradition has grown, evolved and spread through the land; much like the people of our nation. It is a part of our history, our present, and, undoubtedly, our future as well.

The popularity of barbecue has never waned, and we doubt it ever will. With all these delicious ways to roast and eat meat, we’ll keep on enjoying them and passing this truly American tradition on to each successive generation.