Roasting meat slowly over a smoky wood fire can be traced back to prehistoric times. But, it is believed that America’s barbecue tradition originated with the discovery of the Arawak, the indigenous people of the Caribbean and South America. They called their outdoor cooking style “barabicu”, which means “sacred fire pit”.

Since then, the humble barbecue has evolved into a much-loved American tradition. Across the country, you can find many different barbecue styles, all with their own unique cooking methods and flavors.

So, are you hungry for more info about the different barbecue styles in the US? Get the lowdown on the four main styles of American barbecue right here.

If you’re ready to break in your new pit smoker, but you’re undecided which type of barbecue to go for, let us help you with our guide to regional barbecue styles in America.

There are four main regional styles of American Barbecue, which are named after their places of origin. Each has its own recipes and trademark sauces with distinctive flavors.

Carolina barbecue focuses mainly on “pulled” or shredded slow-roasted pork. It is one of the oldest barbecue styles in the American barbecue tradition. In this state, the meat of choice is exclusively pork.

This barbecue style involves seasoning the pork shoulder with a dry rub, then cooking it in an oak-fired barbecue pit for 12 hours or more until mouthwateringly tender. It’s then pulled apart and tossed with a thin sauce of vinegar and cayenne pepper before serving.

In the Western part of the state, you’ll find the Lexington-style barbecue, featuring the pork shoulder as well as smoked pork ribs. There, the vinegar-based sauce is emboldened with ketchup, the meat is exclusively the pork shoulder, and it’s usually served on a bun.

The Eastern Carolina style uses the whole hog and serves it up with deep-fried balls of cornmeal batter, called “Hush Puppies”, and coleslaw.

North and South Carolina have also developed their own barbecue traditions. This is mostly due to the culinary preferences of the European immigrants who first settled there.

North Carolinians brush their cuts of pork with a vinegar-based sauce and spices such as spicy cayenne and crushed black pepper. After smoking, they pull the meat away from the bone, chop it up, and serve it up with more of the vinegar marinade or a ketchup-based sauce.

As in the East, South Carolina also uses the whole hog. They smoke it for as many as 20 hours, then shred and toss it with a sauce of mustard and vinegar before serving it on a bun.

With their large German immigrant population, they favor a mustard-based sauce over the usual tomato or ketchup.

Kansas City barbecues are known for the variety in the types of meat used. You can find barbecues using pork, beef, turkey, chicken, and sometimes even lamb.

This Barbecue style involves dry-rubbing the meat with spices (they especially love pepper) before it goes into the Barbecue pit smoker.

When cooked to perfection, it is served with Barbecue nachos and their famous sweet and spicy signature sauce: a thick, sticky blend of molasses and tomato.

A well-known Kansas City barbecue snack, known as “Burnt Ends” is a bowl of caramelized meaty cubes obtained from off-cuts of the burned, fatty tips of beef or pork brisket. While other folks may cut these off and toss them away, they are a much-loved treat in Kansas City. 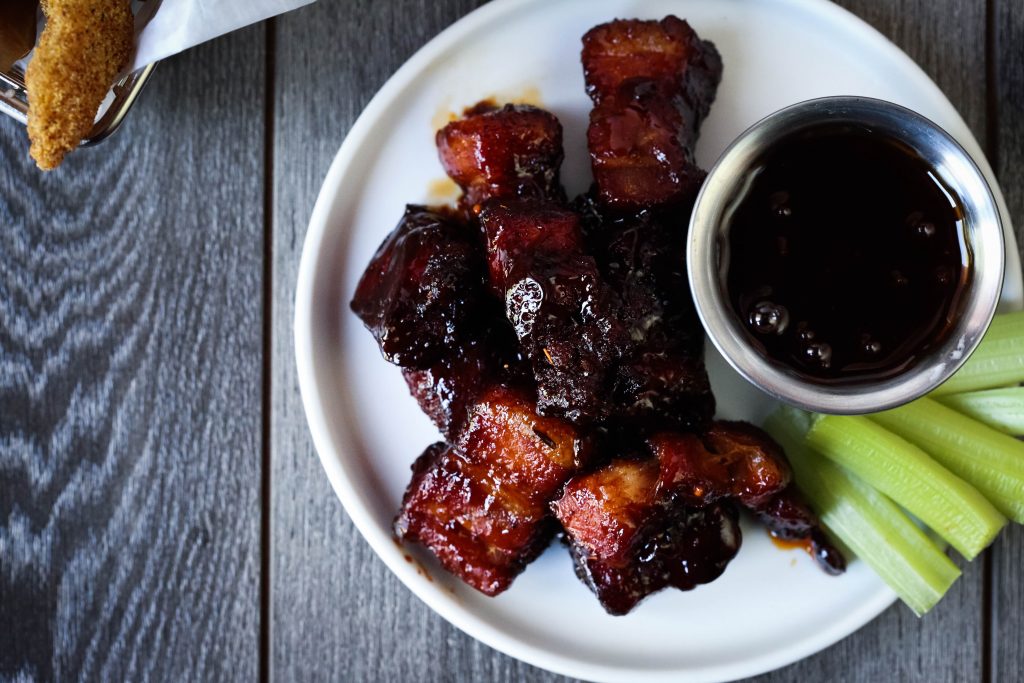 The ends of the large cuts of meat get very crispy when slow-cooked for hours. They will be cut off and chopped into cubes, returned to the smoker, and then coated in a thick and sticky sauce and served up as a tasty snack.

Memphis barbecues are usually pork ribs, low and slow-cooked in a pit over hardwood charcoal. They offer a choice of wet or dry ribs. They marinate the wet ribs in a delicious sauce before smoking them.

The dry ribs are the more popular option. This involves seasoning the ribs with a dry spice rub prior to smoking them. It includes paprika, garlic, cayenne, and black pepper as its base, to which they often add other dry spices.

Memphis-style barbecued ribs are not ordinarily served with extra sauces other than a thin vinegar-based dressing with a hint of tomato.

Memphis is also famous for its delicious “pulled pork sandwich”. They prepare this sandwich by shredding the barbecued pork meat and serving it on a bun, topped with coleslaw.

Texas is a large state with variations in barbecue style across different regions. Beef is usually the meat of choice in Texas, thanks to this state’s long history of cattle raising.

In East Texas, their saucy barbecued pulled beef or pork is similar to what you’ll find in the Carolinas. Southern Texans, perhaps due to a Mexican influence, cook different parts of a cow, including the head, in a covered barbecue pit and then serve this with tacos.

But it’s the Central Texans’ dry-rub beef brisket that has won them millions of fans across the US and around the globe. Texans do their brisket in a way nobody else can.

They prepare it by taking what is ordinarily a tougher cut of meat, seasoning it with salt and pepper and little else, and then smoking it for hours until it is perfectly juicy and tender.

You will generally find this served with bread, beans, and pickles. Sometimes, they may serve a potato salad or coleslaw on the side. Texans usually prefer to focus on the flavor of their excellent quality cuts of beef, without hiding it under heavy sauces.

Barbecue is one of our most cherished American traditions. Above are the four most popular American Barbecue styles, but there are countless variations with different cuts of meat and unique regional sauces.

Now that you’ve worked up an appetite reading about the most popular barbecue styles in America, you can enjoy one of your own. Stop in to your nearest Red Hot & Blue location for a taste of American barbecue. Or, have us cater your next event, in true American style!