Back in the 1490s, Spanish exploration in the Caribbean discovered people using wood to smoke meat. Slow-cooking meat in this way became known as barbecue when it was introduced to the American South. It slowly made its way across the country, and today, each state has its own version of it.

Carolinians take their barbecue seriously, and pride themselves on the finest barbecues in the country. The barbecue dish best known in the Carolinas is pulled pork.

So let’s take a look at their finest barbecue offering, Carolina pulled pork. 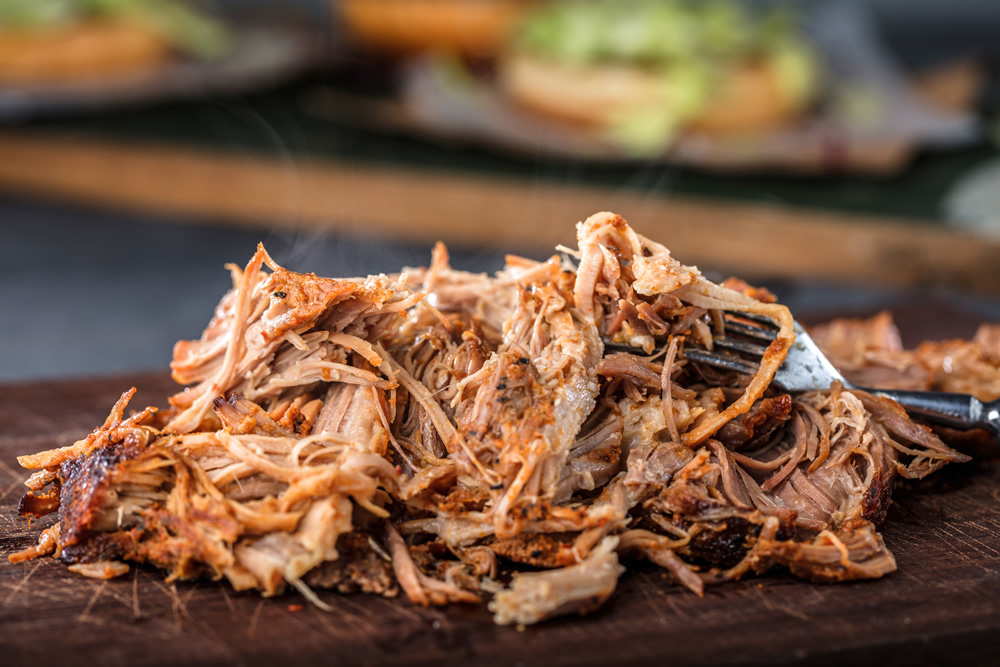 What Is The Origin Of Pulled Pork?

Pulled pork is a staple dish at barbecues in the Carolinas, but originates from the South. Spanish explorers introduced the barbacoa manner of cooking to America. By the time of the colonies, slow cooking a whole hog was a Southern culinary tradition.

Today, people all over the US enjoy barbecue dishes. And while you can use various meats when barbecuing, the Carolinas favor pork.

Pulled pork is a well-known and much-loved smoked pork dish. The recipe varies from region to region, but the pulled pork dishes in the Carolinas are considered the most delicious.

What Is Carolina Pulled Pork?

In the Carolinas, barbecue focuses on “pulled” slow-roasted pork, one of the oldest barbecue styles in the American tradition.

This involves seasoning the pork with a dry rub and roasting it over an oak fire pit for 12 hours or more. It is shredded and dressed with a thin sauce before serving.

The most popular way to enjoy this is as a pulled pork “sandwich”, where you serve the shredded pork on a bun with slaw.

Why Is It Called “Pulled Pork”?

This dish is named after the preparation method for the cooked meat. The roasted pork is shredded (or pulled) into shreds using hands, forks, or meat claws. This process tenderizes the meat and releases the flavor.

There are four main barbecue regions/styles in the U.S. but pulled pork is best known in the Carolinas. The main difference between barbecue dishes from different areas is in the seasonings, sauces, or dressings used.

Carolina pulled pork usually has a spicy, vinegar dressing. Sometimes, it has a tomato base as well.

North and South Carolina developed their own pulled pork traditions.

North Carolinians brush the cut of pork with a vinegar-based sauce, including cayenne and crushed black pepper. Once the smoked pork has been shredded, they serve it with more of the vinegar dressing or a ketchup sauce.

In South Carolina, people will usually use the whole hog and smoke it for up to 20 hours. Once shredded, they dress the pulled pork in mustard and vinegar before serving.

How To Make Perfect Pulled Pork

The secret to perfect pulled pork is not the sauce. It’s the roasting method, cooking it “low and slow”. If you do not have a smoker, you can use your barbecue to cook your pork cuts, but keep the temperature low.

Wrap the pork cut roast in foil to seal in the moisture. This will ensure that the pork becomes very tender, enough to fall off easily from the bone.

You can also slow roast your pork cut in a slow cooker. Slow cooking in a sauce is what gives it such juicy tenderness and flavor.

Bring these ingredients to a boil and simmer for 25 minutes. Coat the shredded, roasted pork before serving on a bun with slaw.

What Pork Cut Should I Use For Carolina-Style Pulled Pork?

The shoulder cut is the most tender one – making it ideal for Carolina pulled pork.

There’s nothing tastier than a delicious barbecue, but Carolina pulled pork is the ultimate pork dish to pig out on. Pun intended. If you are not familiar with this tasty barbecue tradition, give it a try today.